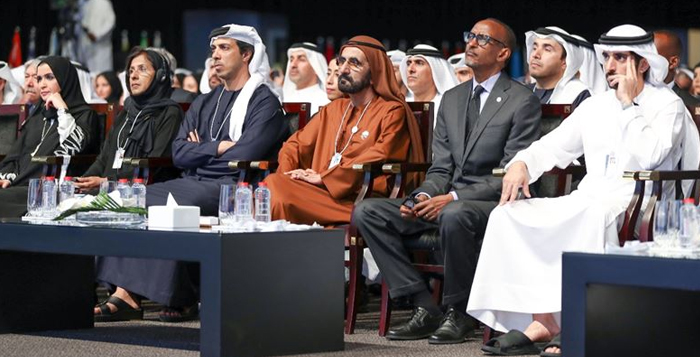 During his speech, Sheikh Saif said that the UAE’s journey is characterised by overall wisdom, due to its exceptional leadership and the skills of President His Highness Sheikh Khalifa bin Zayed Al Nahyan, who have progressed its journey with confidence and merit.

He added that the wisdom and future vision of His Highness Sheikh Mohamed bin Zayed Al Nahyan, Crown Prince of Abu Dhabi and Deputy Supreme Commander of the UAE Armed Forces, have strengthened the UAE’s journey and soft power through his projects and initiatives, and the world has attested the country’s pioneering, wisdom and future vision.

During the second part of his speech, titled, "The UAE’s Wisdom," Sheikh Saif affirmed that wisdom combines goodness and positivity, and the Wise Man of the Arabs, the late Sheikh Zayed bin Sultan Al Nahyan, combined wisdom, justice and rational thinking, which have enabled the UAE to become a leading nation, through his legacy of goodness, love and peace that placed him in the hearts of everyone. He also pointed out that the UAE has produced and will continue to produce wise leaders, who will be immortalised by history.

Sheikh Saif mentioned examples of the UAE’s wisdom, which include its political wisdom and its long history in the region while highlighting the wisdom of Sheikh Mohamed bin Zayed and his ability to solve regional conflicts with his wisdom and faith, and pointing out that Sheikh Mohamed’s policies attract good people and achieve advancement and international stature.

He then attributed the UAE’s economic success to many reasons, including its economic wisdom in managing projects and capital investments while explaining that the secret to the UAE’s real success is its investment, due to its leadership’s wisdom, in the people, through quality education and its foreign exchange programmes. The UAE utilised its financial resources and strengthened its real resources by investing in the people, who are the most precious resource of the nation, he further added while noting that the country’s economic success and major projects have achieved the happiness of Emirati people, who are the happiest people in the universe.

Sheikh Said affirmed that wisdom appears in difficult times, and the UAE was established on the principle of instinctive social integration, and Emirati wisdom is represented by country’s leadership and its people’s cohesion during times of peace and war while explaining that the modesty and closeness of the leaders to the people and their sound instincts have strengthened their cohesion, and pointing out that wisdom is the foundation of governance, and without it civilisations fade and countries fall.

During the next part of his speech, titled, "Wisdom of Balance between Strength and Tolerance," Sheikh Saif stressed the importance of maintaining a balance between strength and tolerance because they are two sides of one coin, which is a form and reflection of wisdom while giving relevant examples from Arab history.

"It is wise to balance your defensive power, to protect your security and the security of your neighbours, and building your country on the principles of tolerance and peaceful coexistence," he stated.

Sheikh Saif explained, during his next talk, titled, "Wisdom of Challenge," the UAE’s efforts to improve its people’s living standards and achieve integration while pointing out that the UAE’s strategy was established in 2007, and over the last ten years, the UAE Government has achieved leadership in 50 international indexes, which he attributed to the wisdom of the country’s leadership and the selection of young and qualified administrators, through an evaluation process based on strategic thinking, innovation, future foresight, communication and openness, as well as interviews and hiring and the efficiency of the government system.