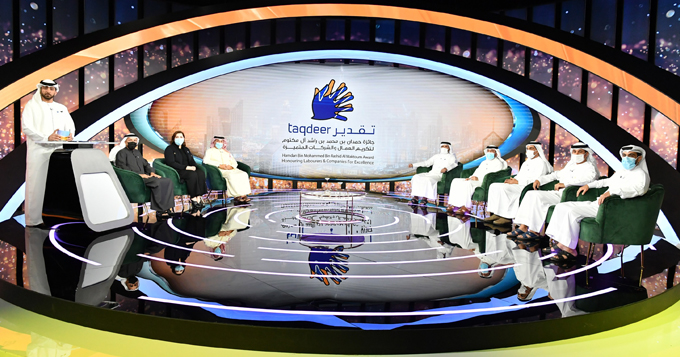 Initiative aimed at fostering a culture of excellence and leadership

Four Dubai government departments  have announced an initiative to provide incentives and support to the winners of 4 and 5-star ratings in the fourth edition of the Taqdeer Award, being organised under the patronage of His Highness Sheikh Hamdan bin Mohammed bin Rashid Al Maktoum, Dubai Crown Prince and Chairman of The Executive Council of Dubai.

The Award’s management, represented by its Chairman His Excellency Major General Obaid Muhair bin Sorour, and representatives of government bodies, the Roads and Transport Authority (RTA), Dubai Electricity and Water Authority (DEWA), Dubai Municipality and General Directorate of Residency and Foreigners Affairs in Dubai (GDRFA-Dubai), today signed four Memoranda of Understanding (MoUs) that create the framework for the implementation of these incentives under specific terms and conditions. The MoUs were signed at a press conference held in Dubai today.

The initiative aims to support excellence and leadership in the labour sector and encourage positive competition among labour-intensive companies, engineers and workers to obtain higher ratings in the Taqdeer Award scheme.

The four government agencies will be providing a total of 35 incentives to the winning companies and workers, notably: discounts of 25 - 50 per cent in fees for tender document submissions to the participating government agencies; grant of additional points within the engineering excellence initiative in the technical evaluation process for contractors and consultants in Dubai Municipality projects based on specific criteria of the Building Permits Department, and waiver of renewal fees for professional competence certificates for engineers for a year, renewable subject to the result of the implementation of the decision.

Other incentives include membership in GDRFA–Dubai’s Innovation and Creativity Center that will allow the workers and companies to take advantage of its services; special facilities for registering intellectual property of the winning companies free of cost; free virtual training courses at DEWA Academy; free NoL cards for workers; and the opportunity for companies to place an advertisement on a display board in a Dubai Metro Station.

Companies and workers winning 4 and 5-star ratings in the Taqdeer Award can contact the four government agencies for details and implementation of the incentives based on terms and conditions, following the Taqdeer Award gala ceremony on 8 February.

The press conference to announce the incentives, hosted by Dubai TV, the Strategic Media Partner of Taqdeer Award, was attended by His Excellency Major General Obaid Muhair bin Suroor, Deputy Director-General of GDRFA-Dubai and Chairman of Taqdeer Award; His Excellency Mohammed Obaid Al Mulla, Member of the Board of Directors at RTA; His Excellency Dr. Yousef Al Akraf, Executive Vice President for Business Support and Human Resources Support at DEWA; His Excellency Mohammed Al Mutaiwee, Assistant Director-General for the Communication and Society Sector at Dubai Municipality, and Brigadier Khalaf Al Ghaith, Assistant Director-General of Follow-up Sector of Violators and Foreigners at GDRFA. It was also attended by representatives of semi-government and private entities supporting the Award as Platinium and Gold Sponsors including His Excellency Thani Al Zaffin, Director-General and Board Member, emaratech Group, Waleed Al Jaziri, Director of International Affairs, flydubai and Haleh Nia, Chief Purpose Officer, NIA.

His Excellency Major General Obaid Muhair bin Sorour further said: “On behalf of the Award team, I express my great appreciation for this wonderful gesture by the four government departments and for offering these incentives which will positively impact companies and workers and motivate them to exert more efforts to win the Award. We believe this is a vital step towards realising the vision of the Award and our objective of contributing to enhance Dubai’s reputation as the world’s best city to live, work and invest in.”

He also revealed that a Golden Identification Card will be awarded to each company with 4 and 5-star ratings to facilitate the process of obtaining the incentives provided by the government departments. The special cards for winning workers and engineers will qualify them for special discounts from commercial establishments and shops near labour accommodations.

Speaking about the incentives provided by RTA to companies and workers winning 4 and 5-star ratings, His Excellency Mohamed Obaid Al Mulla said: “We are happy to support the Taqdeer Award which plays a major role in strengthening the government sector’s relationship with owners of private sector companies and their workers, which is key to strengthening Dubai’s position as the best city in the world to live and work. Since its establishment, RTA has been committed to strengthen its relationship with private sector institutions and companies, as they are key partners in achieving the Authority’s vision to establish global leadership in sustainable mobility. The signing of the agreement with the Taqdeer Awards management enables RTA to support Dubai’s effort to promote excellence in labour practices.”

Commenting about the incentives provided by DEWA, Dr. Youssef Al-Akraf said: “On behalf of His Excellency Saeed Mohammed Al Tayer, Managing Director and CEO of DEWA, I am pleased that the Authority is supporting the Taqdeer Award. The Award is a major initiative to strengthen Dubai's efforts to safeguard workers' rights and encourage institutions and companies to promote labour welfare. In addition to financial support for the Award, DEWA has approved a set of incentives for the winning companies, including discounts in fees for tender documents for small and medium projects; supply of equipment, tools and devices; training for 50 people annually; use of the DEWA Academy’s training hall for 100 people twice a year; and the opportunity to visit the Mohammed bin Rashid Al Maktoum Solar Park and the Innovation Center. These are in addition to other incentives aimed at encouraging excellence in worker welfare practices.”

His Excellency Mohammed Al Mutaiwee said: “Dubai Municipality’s commitment to worker welfare reflects our social responsibility towards this important segment. We believe in fostering a sense of connection between workers and the management, which motivates workers to contribute more and creates a culture of appreciation for their efforts. The Taqdeer Award is in line with the objectives of the Dubai Plan 2021, which seeks to promote a cohesive society by adopting human values ​​based on the principles of tolerance, co-existence, justice and equality to help build constructive working relationships that respect everyone’s rights.

His Excellency Brigadier General Khalaf Al Ghaith said the GDRFA-Dubai incentives will help to enhance excellence and innovation among winners of the Taqdeer Awards.  “GDRFA-Dubai’s decision to participate in this initiative as a strategic partner of the Taqdeer Award reflects its commitment to supporting Dubai’s efforts to transform itself into the world's most preferred city to live and work, in line with the Dubai Plan 2021. Key incentives to be provided by GDRFA-Dubai to the winners are a package of facilities related to issuing of visas, which includes express service at any service delivery centre. Chief Executives of the winning companies will also be granted a five-year residency according to the conditions and procedures stipulated by the cabinet and discount (happiness) cards for workers of winning companies and their relatives. We will put in place a clear mechanism for the winning companies to obtain these incentives.”

His Excellency Thani Al Zaffin, Director General and Board Member of emaratech Group, said: “The Taqdeer Award has played an important role, since its inception in 2016, in establishing strong relationships between workers and companies in a way that serves the interests of both parties and preserves their rights and duties. We are confident that the Award will contribute more to consolidating the vision to make Dubai the most preferred place globally to live, work and invest.”

Haleh Nia, Chief Purpose Officer at NIA, said: “The Taqdeer Award has set a world-class example through the innovative reward system that recognises excellence in worker welfare practices. We consider it a wonderful initiative that will contribute to building strong, constructive and profitable relationships between the employers and workers. At NIA, we believe in the philosophy that workers come first, a philosophy that we share with the Taqdeer Award.”

Waleed Al Jaziri, the representative of flydubai, said: “flydubai is always keen to support all efforts and initiatives that enhance Dubai's reputation as a lifestyle and business destination. We have been proactive since the Award was launched in 2016 to sponsor it and provide tickets for the winners. The Award is in line with our social responsibility, which reflects our strategy in facilitating the flow of tourism and business to Dubai. Taqdeer Award is a pioneering step from Dubai inspired by the directives of its leadership to enhance work culture and create a positive environment for workers.”

Organised every two years, the Taqdeer Award aims to establish international best practices in workers welfare, strengthen employer-employee relations and protect the rights and interests of both the parties, in line with the efforts of the UAE.  Since its inception, the Award has been able to instill its vision, standards, goals and objectives among its targeted sectors that include labour-intensive industries - construction and electromechanical, free-zones, manufacturing and professional services. Companies with more than 100 workers that have met specific conditions and criteria are eligible to participate in the Award.