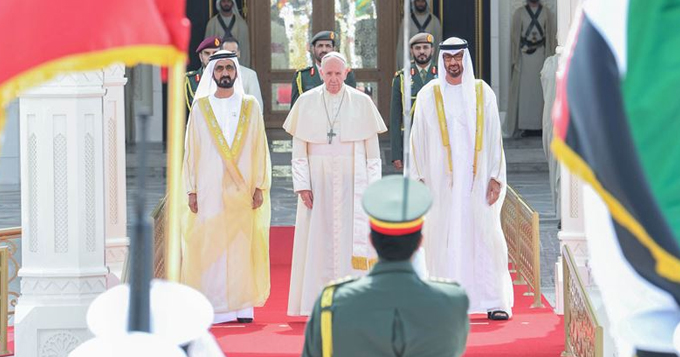 Vice President and Prime Minister of the UAE and Ruler of Dubai His Highness Sheikh Mohammed bin Rashid Al Maktoum and Crown Prince of Abu Dhabi and Deputy Supreme Commander of the UAE Armed Forces His Highness Sheikh Mohamed bin Zayed Al Nahyan received this morning Head of the Catholic Church Pope Francis. Pope Francis is in state visit to the UAE.

Upon his arrival at the Presidential Palace, Pope Francis, accompanied by cavalry on Arabian horses, was accorded an official reception. A 21-gun salute was fired in honour of the Pontiff, following which the Papal Anthem and that of the United Arab Emirates were played.

Their Highness welcomed the state guest and expressed their happiness for this historic visit. They also expressed their confidence that the visit contributes to strengthening the values and practices of tolerance as practised by our country, whose people live in social harmony, peaceful coexistence, and culture dialogue.