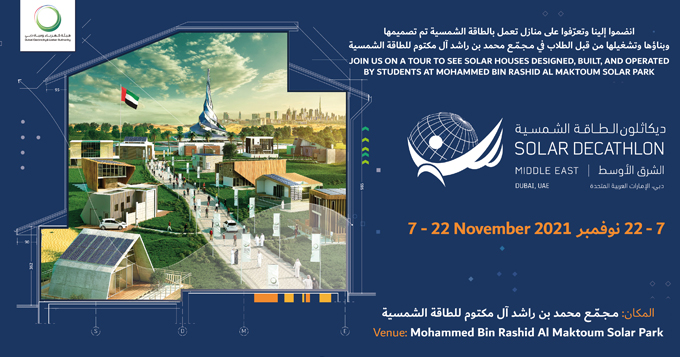 As part of its preparations for launching its pavilion at Expo 2020 Dubai, Dubai Electricity and Water Authority (DEWA) has begun its stand dedicated to the Solar Decathlon Middle East (SDME) competition. SDME is organised under the patronage of HH Sheikh Hamdan bin Mohammed bin Rashid Al Maktoum, Crown Prince of Dubai and Chairman of Dubai Executive Council, as part of an agreement between DEWA, the Dubai Supreme Council of Energy, and US Department of Energy. The SDME stand will feature modules presented by the teams participating in the second edition of the competition, which will be held in conjunction with Expo 2020 Dubai, as well as the smart and sustainable house introduced by the FutureHAUS team at Virginia Tech University, which placed first in the SDME competition organised by DEWA in 2018.

"SDME is of great importance to DEWA as it is the largest and most competitive global competition among international universities. This competition comes as part of DEWA's efforts to enhance the UAE's position as a platform for creativity, an incubator for creators and a destination for innovators from all over the world," said HE Saeed Mohammed Al Tayer, MD and CEO of DEWA.

"DEWA follows the directives of HH Sheikh Mohammed bin Rashid Al Maktoum, Vice President and Prime Minister of the UAE and Ruler of Dubai, to provide opportunities for young people to unleash their energies and encourage creativity and innovation to develop solutions and support global efforts to mitigate climate change. Based on our belief in youth as the driving force to build a brighter future, we are organising the second edition of SDME at the Mohammed Bin Rashid Al Maktoum Solar Park, the world's largest single-site solar park. The event will encourage young people to create designs for smart and sustainable, solar-powered homes and are in line with the cultural, social, and climatic environment of the Middle East, as a part of our efforts to achieve sustainable development and reduce global warming, and support Dubai as a future city that adopts sustainable solutions," added Al Tayer.