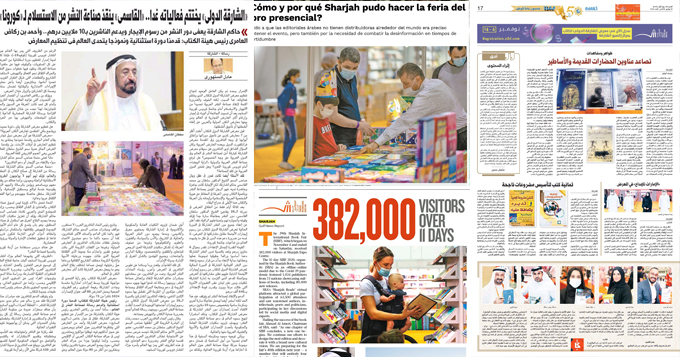 Being the first on-ground exhibition since the onset of the coronavirus (COVID-19) pandemic, the 39th edition of the Sharjah International Book Fair (SIBF), organised by Sharjah Book Authority (SBA), has amassed incredible media coverage from hundreds of newspapers, news agencies, radio and television channels from around the around the globe.

The events of the first-ever hybrid edition of SIBF, which combined a mix of on-ground and virtual events, have been discussed in over 10,000 news items in over a dozen languages including French, German, Italian, Portuguese, Korean, Russian, Urdu, Spanish, Malayalam, and English.

With prevalence across written and multimedia formats, stories of the book fair’s success backed by the emirate’s successful cultural project led by His Highness Sheikh Dr. Sultan bin Muhammad Al Qasimi, Supreme Council Member and Ruler of Sharjah, were told by regional and international media houses to their readership and reinforced the significance of one of the top three book fairs on the world map.

The 39th edition of SIBF was held between November 4 – 14 under the theme 'The World Reads from Sharjah' with the participation of 1,024 publishers from 73 nations. The event hosted renowned Arab and international authors and witnessed a physical audience of 382,000 individuals who visited the fairgrounds. The book fair also engaged and entertained 63,500 virtual attendees from around the globe on its virtual platform ‘Sharjah Reads’.