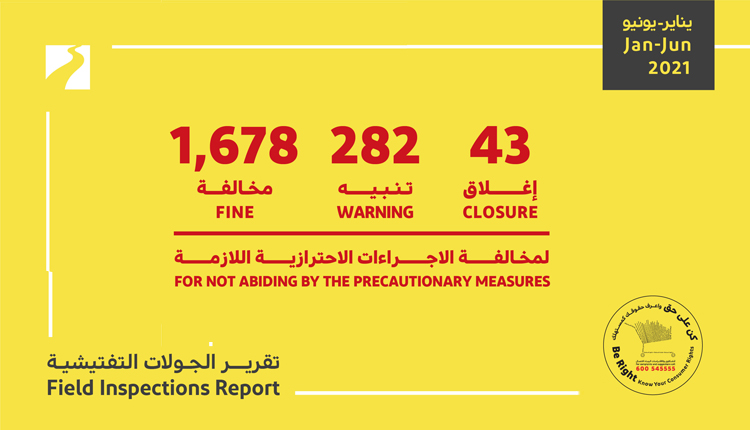 The Commercial Compliance & Consumer Protection (CCCP) Sector of Dubai Economy revealed that it recorded a compliance rate of 97.7% with COVID-19 precautionary guidelines among commercial establishments in H1 2021.

As part of the stringent implementation of globally-benchmarked preventive measures, 43 commercial establishments were closed, 1,678 were fined and 282 were issued warnings during the first six months of this year for non-compliance with COVID-19 guidelines. The violations, detected during inspections across open markets and commercial centres, were mostly related to wearing masks, physical distancing and permitted working hours in restaurants.

Overall, 87,223 commercial outlets undertaking activities involving direct contact with the public, including retail stores, restaurants and sports clubs, were inspected in the first half of this year. Overcrowding and non-compliance with physical distancing guidelines, particularly failure to regulate entry and movement of customers, resulted in fines and closure of establishments that were repeat offenders. Some establishments were issued warnings for failure to display physical distancing stickers, among others.

Dubai Economy said it will continue conducting inspections along with its various partners with a special focus on shopping malls and locations that might see overcrowding. It stressed that it is following a zero-tolerance policy on violations identified by its inspectors or reported by the public.

Dubai Economy directed traders to strictly adhere to precautionary measures and called on the public to report any violations or non-compliance either on the Dubai Consumer App available on Apple, Google and Huawei stores, the number 600545555, or via the consumerrights.ae website.