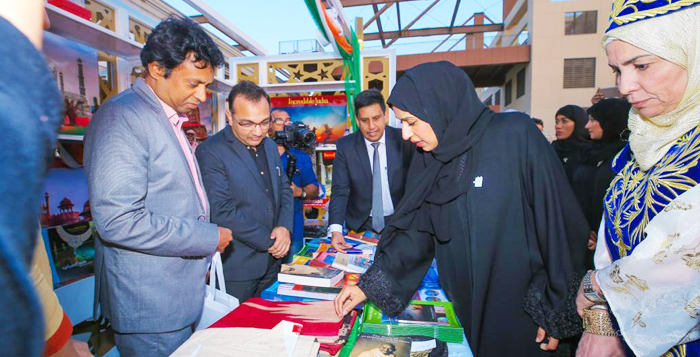 Her Excellency Hessa Bint Essa Buhumaid, Minister of Community Development inaugurated the Global Tolerance Exhibition for Productive Families in the attendance of a number of Consul Generals and their wives at “The Point” in Palm Jumeirah. The exhibition taking place between 7-9 March coincides with the Year of Tolerance 2019 and enhances its vision to support creativity and giving of productive families, ad achieving the principles of coexistence among the nations. This reveals the efforts of the UAE to embrace more than 200 nationalities from different countries who live in respect and coherence.

The Global Tolerance Exhibition is participated by 25 Arab and foreign countries in addition to the UAE which is represented by 8 productive families, of which are Egypt, Saudi Arabia, Kuwait, Bahrain, Yemen, Jordan, Iraq, Libya, Tunisia, Morocco, Algeria, Sudan, India, China, Romania and South Korea.

On this occasion, Her Excellency Hessa Bint Essa Buhumaid Minister of Community Development, stated that the Global Tolerance Exhibition carries a very simple initiative and idea but has a significant, great moral and human value. It reveals the efforts of the UAE and its wise leadership in conveying the importance of global peace and coexistence among the nations as well as harmony, integration and respect between different civilizations. This approach was founded by the United Arab Emirates to which the UAE nationals grew up and continued by the expatriates.

Buhumaid noted that the value of the Global Tolerance Exhibition promotes communication, interdependence, cultural and human exchange under the Year of Tolerance, and at the same time enhances the aspirations of productive families to preserve traditional products and creative ideas and development projects that play an important role in terms of productive participation and contribution to the local market and additional income.

The Global Tolerance Exhibition provides each family participant with a stall to display its national and local products representing the cultural heritage of these countries and nations especially traditional costumes, handicrafts, traditional cuisines, handicrafts and inherited habits.

Furthermore, Ali Rashid Lootah, Chairman of Nakheel, said: “We are honored and proud to host this unique event, organized by the Ministry of Community Development as part of the Year of Tolerance, at our new waterfront development, The Pointe at Palm Jumeirah.”