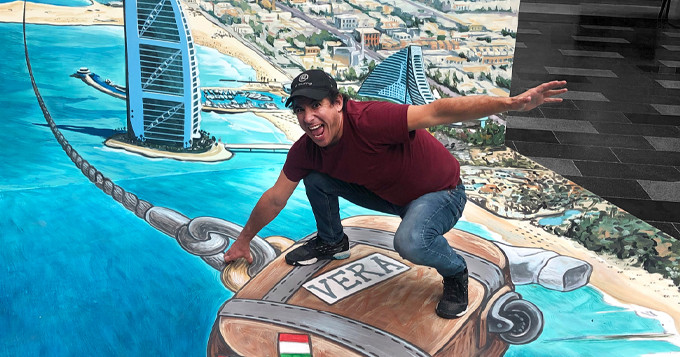 Dubai Canvas, the month-long art festival organised by Brand Dubai, the creative arm of the Government of Dubai Media Office, in partnership with Meraas, is exhibiting a series of unique artworks highlighting humanity’s love for travel.

As the world seeks to recover from the COVID-19 crisis, the 3D art festival, which runs until 31 August at City Walk, aims to reconnect audiences with the human spirit of adventure and imagination under the theme of ‘Travelling Through Art’.

Shaima Al Suwaidi, Manager of City Branding, Brand Dubai, said: “Dubai Canvas 2020 features a unique group of contemporary artists with diverse styles and artistic approaches. Juandres Vera and Milan Katanic, two of the world’s most well-known street artists, are exhibiting their works at this year’s festival. They are joined by some of the UAE’s most promising artists including Mahra Al Falahi, Saggaf Al Hashemi and Ahmed Al Mahri.”

“Aesthetically playful and experimental, the artworks on display at Dubai Canvas are delightfully interactive pieces that invite audiences to engage with them. The perspective-bending 3D murals encourage people to become part of the artwork and capture priceless instagrammable moments,” she added.

Guinness World Record Holder Juandrés Vera brings to this year’s Dubai Canvas a blend of street art, with his trademark style of creating immersive aesthetics and realism. His work ‘Come Fly with Me’ shows a plane flying high above the Burj Al Arab with a piece of luggage in tow. “We might have created boundaries on the ground, but high above in the air, there's plenty of room waiting for each one of us to fly,” says Vera about the theme of the artwork.

Another piece created by Vera titled ‘A New Message in a Bottle’ conveys a cautionary tale told by the sea. “The sea is the oldest and largest bridge that connects the creatures of the planet. If we don’t work together it may come to an end sooner or later,” says the artist about the message behind the work. Vera’s works, which evoke a childlike wonder, make audiences feel they can actually walk into the image.

One of the UAE’s leading artists 37-year old Saggaf Al Hashemi’s piece titled ‘Rocket Traveling Through Space’ features an arresting 3D illusion in which a glowing rocket bursts out of the floor. With a series of artworks, Al Hashemi seeks to convey his pride at how the UAE has transformed its space dreams and ambitions into reality.

23-year old Mahra Al Falahi, one of the UAE’s most promising young artists, has created two murals at Dubai Canvas titled ‘A Plane of Thoughts’ and ‘The Wonder Brush’. Featuring a paper plane flying in the sky, ‘A Plane of Thoughts’ is awe-inspiring despite its simplicity. The painting reminds us of our capacity to fly to any place we can dream of through the wonderful gift of imagination. In a similar vein, the ‘The Wonder Brush’ talks about the unlimited possibilities that creativity can open up. “Close your eyes and let the wonder brush take you to the most wonderful places,” says Al Falahi.

In addition to the 3D murals, visitors to Dubai Canvas have a chance to attend live pendulum painting performances led by Serbian artist Milan Katanic, better known by his pseudonym Kal3. The performances use a swinging pendulum instead of a paint brush to create enthralling spectacles. Combining science and art, the Spirograph-inspired project offers a unique kinetic art experience for the public.

Ahmed Al Mahri, one of the UAE’s most accomplished calligraphic artists, has created contemporary calligraphic murals at Dubai Canvas. He also hosts an interactive live calligraphy show that gives the public deeper insights into the classic and timeless art form.

Music and entertainment shows held from 4.00 pm to 9.00 pm on weekends feature mime performances as well as recitals of the acoustic harmonica and percussion instruments. ‘Basita Band’ is one of the musical groups performing at the festival.