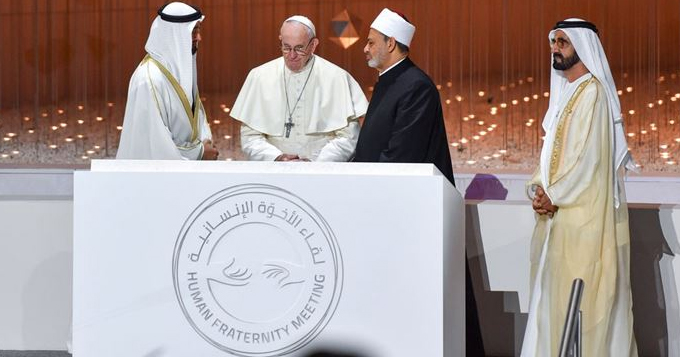 His Highness Sheikh Mohammed bin Rashid Al Maktoum, Vice President and Prime Minister of the UAE and Ruler of Dubai, and His Highness Sheikh Mohamed bin Zayed Al Nahyan, Crown Prince of Abu Dhabi and Deputy Supreme Commander of the UAE Armed Forces, attended today the signing of a document on ‘Human Fraternity’ by His Holiness Pope Francis, head of the Catholic Church, and His Eminence Dr. Ahmed el-Tayeb, Grand Imam of Al Azhar.

The ‘Human Fraternity’ Declaration seeks to build bridges of love, amity and coexistence among peoples and to confront extremism and its negative impacts.

The signing was attended by more than 400 religious leaders, as well as thinkers and intellectuals from around the world.

During the occasion, HH Sheikh Mohammed bin Rashid also announced the launching of a new award, ‘The Human Fraternity Award – Dar Zayed,’ which was jointly bestowed on Pope Francis and the Grand Imam.

The award was given to Dr. Ahmed el-Tayeb in recognition of his firm position in defence of moderation, tolerance, global values and his vehement rejection of radical extremism. In his messages, lectures and sermons, Dr. El-Tayeb always emphasises the common message of all religions that calls for coexistence, rejection of hate and rejection of others, good neighbourliness, respect for the rights of others and acceptance of differences, as opposed to enmity and exclusion.

The acceptance by Pope Francis of the award is seen as highlighting its significance and the role it is expected to play in the future promoting principles of peaceful co-existence. His Holiness has previously been nominated for several global awards but has declined them.

Pope Francis is known as an advocate for tolerance and the laying aside of differences. His determined call for the pursuit of peace and fraternity among humanity brotherly peace among the human kind is evident from his journeys, during which he seeks to promote efforts to overcome the challenges of sickness, poverty and illiteracy, to open up channels of cultural dialogue and to build bridges, not barriers.

Today, we celebrate together the signing of the ‘Human Fraternity document’. This is an historic moment which emphasises, above all, the importance of cultivating respectful dialogue and understanding among followers not just of the two faiths represented here today, but among all people, of all faiths. The UAE is delighted to serve as the foundation and platform of this remarkable event.

I am also pleased to announce the launch of the ‘Human Fraternity Award - From Dar Zayed’. The purpose of this award is to honour those who work tirelessly and sincerely to bring people together. Today, the UAE is honoured to bestow this inaugural award on both His Holiness Pope Francis and His Eminence Dr. Ahmad At-Tayyeb for their distinguished and determined efforts to foster peace between people throughout the world.

Your Holiness, Your Eminence, Honoured Guests.

We stand here with you on this historic day and pledge that the United Arab Emirates will continue to bear the banner of human fraternity and to be its protector. We pledge not only to continue to support all the efforts being made to make this region more peaceful, but to lead that effort. Ours is a pledge of fraternity, tolerance and dialogue.